This was originally posted on my tumblr, the-feels-assassin, on February 22, 2015. When this post was written, Age of Ultron had not yet come out. That said, the existence of Laura Barton doesn't change anything I have to say here. :)

ourheartsrace asked: can you or someone you know explain me why are Clint and Natasha soulmates? i've seen on Tumblr many people saying this. but i'm not really familiar with the comics. i'm currently reading captain america vol 5 so i don't know much about comic Clint but Bucky seems more - at least so far - like a soulmate to Nat for me because of their backstory

Oh, my friend, you have come to the right place.

*brushes off old comic books and lots of feels*

In the movies Black Widow and Hawkeye don’t get much screen time. But we do know a couple of things about the two of them together. (1) All Coulson had to do to bring Natasha in from an apparently successful mission was say Clint’s name. (2) Natasha didn’t kill Hawkeye while he was brainwashed by Loki, even though it would have been easier and less risky both personally and to the overall mission of protecting the helicarrier. (3) Clint brought Natasha into SHIELD when “he made a different call” and presumably defied a SHIELD order for Natasha. (4) In the after-credits scene following The Avengers, Black Widow and Hawkeye are all up in each other’s personal space. (5) In Cap 2, Natasha wears an arrow necklace.

It’s not a lot. And perhaps not enough to say whether or not they are soulmates in the movies without some extrapolation and comic book influence.

So let’s set the movies aside for a moment and talk about the comic books.

Hawkeye was a marksman at the Coney Island Circus when he saw Iron Man doing his thing, being a hero, and thought “hey, I could do that, I could be a superhero.” So Hawkeye, being the lovable doofus he is, goes out and tries to stop a jewelry thief only to have the cops think HE is the one stealing the jewels. Hawkeye is THISCLOSE to being arrested when along comes a spider. 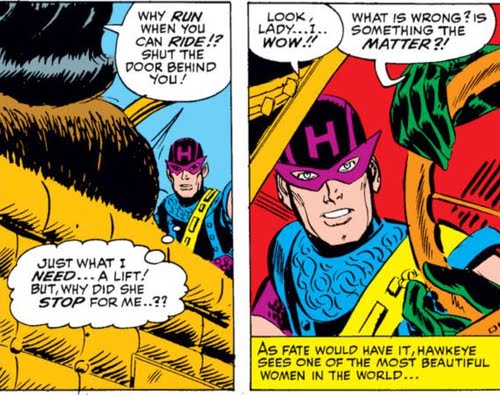 Basically, Clint falls in love with Natasha and follows her into a life of villainy. For three issues (Tales of Suspense 57, 60, and 64), Clint and Natasha are a villainous duo. While at first it seems that Clint’s love is unrequited and the Black Widow is just using him as her muscle…

…it quickly becomes clear that this is not the case. Natasha loves Clint just as much as he loves her.

In these early appearances of the Black Widow, it becomes clear that Natasha has a mission given to her by her homeland—to destroy Iron Man. Hawkeye is happy to help her do that, but he will not commit treason for her, and he will not destroy Iron Man at the risk of her life. Most of these comics end with Natasha getting hurt and Clint carting her away to safety, leaving Iron Man undefeated. (In contrast to the tendency of certain portions of fandom to characterize Clint Barton as a bumbler, it’s clear in these early stories that the only reason that Clint doesn’t defeat Tony—repeatedly—is because he’s more interested in protected Natasha from harm.)

Unfortunately for Hawkeye and Black Widow, her Soviet masters are not very happy with her failure to destroy Iron Man. So Black Widow’s masters take her away after she gets hurt, leaving Hawkeye alone. Away from Natasha’s influence, Clint remembers his original heroic intentions and joins the Avengers.

So Hawkeye finally becomes the good guy he always intended to be, but he does NOT forget Black Widow. And he never stops loving her.

Unbeknownst to Hawkeye, Natasha’s masters brainwash her. (In later issues, it’s revealed that this isn’ the first time Natasha has been brainwashed or manipulated by her masters—and unfortunately for her, it won’t be the last time she loses her memory, either.)

But Natasha’s love for Clint is too strong. She calls Hawkeye to her, intending to recruit him as part of her villainous team. When he reveals that he became an Avenger while she was away, she knows she should fight him like she fights the rest of the Avengers—but she can’t. And in the end, her love for Hawkeye breaks through her brainwashing.

He breaks through her brainwashing but….she doesn’t become an Avenger. Natasha has to take her own path to the light, a path that involves still more dark deeds and times when she and Clint are at odds with each other.

Natasha’s path to the Avengers is not straightforward. But it involves her dating Matt Murdock (Daredevil) and working with him for quite a while.

There is some very childish behavior from Clint in here—which makes sense if you think about how young Clint probably is during this time period—where Clint sulks after being rejected by the Scarlet Witch and then gets upset that Natasha is with Daredevil and not him.

Now, we end comics history and start talking about some of my thoughts, feels, and interpretations.

Clint Barton was a lost carnie who was trying to be more than he was, when his life path was completely derailed by this beautiful, mysterious woman. And despite the wishes of her masters—and perhaps her own intentions— Natasha Romanoff fell in love with him.

It is, I think, one of the greatest regrets of Natasha’s life that she turned Hawkeye into a villain. I think she looks at their relationship and sees all the wrongs she did him, instead of the many ways she did right by him.

But the greatest testament to Clint and Natasha’s relationship is how it’s withstood everything in their lives—how it’s survived all the other relationships. It doesn’t matter who Clint and Nat are involved with romantically.

And out of all of their friends and lovers, out of their colleagues and coworkers, Clint and Natasha know that they understand each other. That they come from the same place. And that if no one else will understand, the other will.

Clint Barton and Natasha Romanoff are two very broken people. They are the two Avengers most often misperceived by the public and their colleagues: Clint gets underestimated and Natasha gets smeared. They have pasts that should have made them villains—and did for a short while—but they overcame those pasts.  And it’s their brokenness that makes them soulmates. To paraphrase myself, they are two broken people, incomplete in themselves because of the pieces other people have taken out of them. It just so happens that their jagged edges line up, like puzzle pieces. They fit together and complete each other.

And no matter the lovers, no matter the Buckys, Phils, Bobbis, Matts, and Jessicas of the world, Clint and Natasha will always have each other. Their relationship surpasses and transcends romance; it’s deeper than kisses or sex. It’s bedrock, foundational to their lives and to the very definition of their characters. No situation is too dirty, too dark, too dire, or even too happy. They will always have each other’s backs.

And that’s why I think they are soulmates.

Doth a fountain send forth at the same place sweet water and bitter? James 3:11

New posts on Tuesdays and Thursdays!